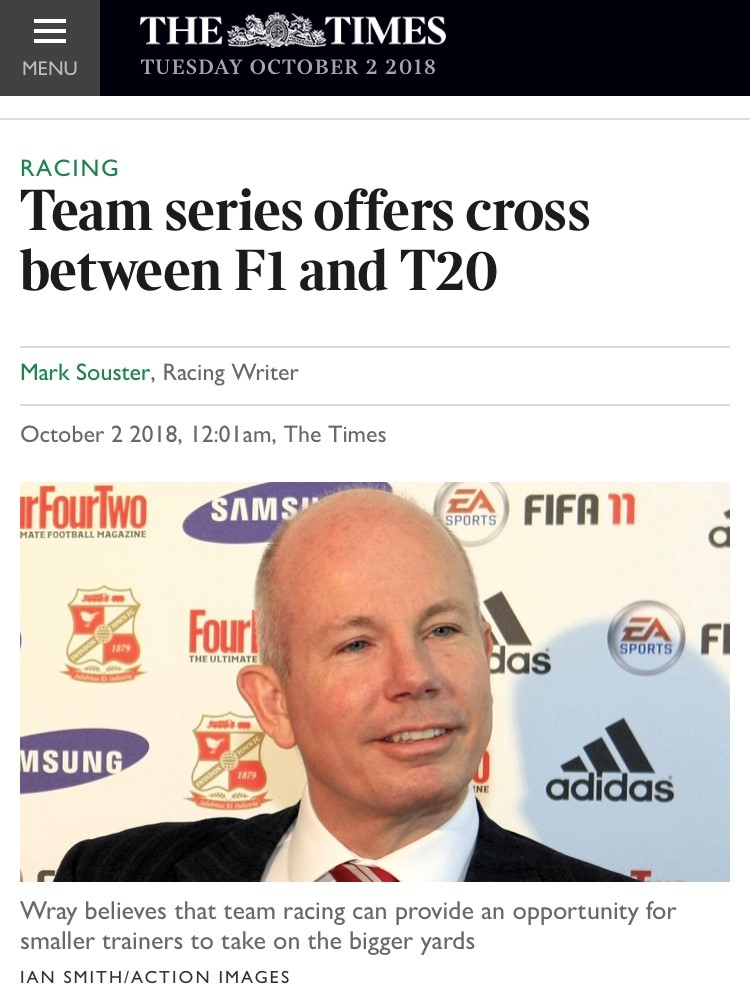 CHR in The Times

'Plans for a team-based racing series with £5 million in prize money take a step forward this week with every trainer in Britain set to receive details of the proposed event, which is due to start next July.

Championship Horse Racing (CHR) says it wants to add a new dimension to the sport and act as a platform where fans and brands can interact. It pitches itself as a cross between Twenty20 cricket and Formula One motor racing.

The format will see 12 teams, with 30 horses and four jockeys in each, take part in an eight-fixture series held on consecutive Thursdays at eight grade-one racecourses across Britain. The British Horseracing Authority has sanctioned the fixtures, in principle.

The six races at each meeting will all be £100,000 handicaps and teams will vie for points over the series to provide an overall winner. Each team will have one runner per race. Points will be awarded for the first ten horses home, so every race will have meaning. Whips will be banned for the series.

ITV is understood to be ready to broadcast the series, while media partners and brands, many with no present connection to racing, are being courted. The organisers say global names are in discussion to sponsor the teams, which will each be headed up by a trainer.

Jeremy Wray, the CHR founder and chief executive, says this week’s delivery of a four-page document to the 600 trainers outlining the series is a big development.

“We have moved far beyond a concept,” he said. “Racing is keen for us to ensure those middle-ranking and smaller trainers get an opportunity to compete with some of the powerhouses. This is what underpins what we are planning.

“The top end of racing in Britain is as good as anything anywhere, as is breeding. But if you come below that where 95 per cent of the horses are, then there is scope to do something.

“Buy-in from trainers and owners is key. You don’t have to get a squad of 30 yourself. We want to make sure if a trainer has as few as five horses that fit the category, and they want to take part, they can team up with other trainers.”

Wray said trainers interested in learning more about the series can attend one of three meetings being held this month at Newmarket, East Garston and Doncaster.

The courses to be used will be revealed at the end of this month, the teams — in principle — by the end of November and the sponsors by Christmas.

“We have had huge interest from brands already but their identities are subject to non-disclosure agreements,” Wray said. He added that they would be expected to come from a cross-section of consumer brands, financial services, media companies, airlines and cars.

“This is going to be about the personalities, the people in racing we know nothing about,” he said. “The meetings will last two and a half hours. Jockeys will not have to change silks so they have time to interact with the fans.”'